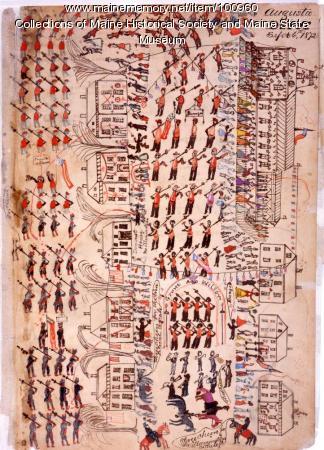 Bands and supporters from Portland, Bangor, and Augusta met at the Augusta train depot on September 6, 1872 in a political rally.

John Martin (1823-1904) of Bangor illustrated the event as part of his "Scrap Book no 3" that he wrote and illustrated starting in 1876. In it, he recounted current events and recalled past ones.

Martin, an accountant and shopkeeper, and fellow supporters of the Republican ticket to re-elect U.S. Grant and his running mate, Henry Wilson, took a train from Bangor to the rally, then returned home on the train.