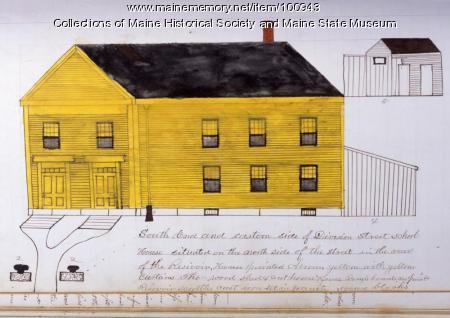 John Martin (1823-1904), an accountant, shopkeeper, and author and illustrator of a journal recounting his life and experiences in the Bangor area, drew this illustration of the Division Street School, which he included on page 618 of his journal.

Martin wrote that until the Center Street school was built in 1855, his eldest daughter, Ada, attended the Division Street School. He wrote, "In 1844 when I came to Bangor last Miss Norcross taught an exelent school in the yellow school house she was very much endeared to all her schollars."

The area became largely Irish and Martin reported that his wife, Clara, and other parents complained about the condition of the school. It was cleaned up and a new teacher installed.

Martin wrote under the illustration, "South End and eastern side of Division Street school House situated on the north side of the street in the rear of the Resivoir, House painted chrome yellow with yellow curtains The wood shed & out house fence Rough boards no paint Resivoir scuttles cast iron set in granit square blocks."