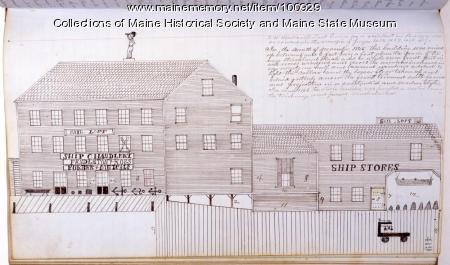 John Martin (1823-1904) of Bangor drew an illustration of the Pendleton & Ross stand, formerly known as the Tainter Block, in Bangor.

Martin, an accountant and shopkeeper, worked for Pendleton & Ross ship chandlers beginning in 1854. Martin wrote that Pendleton & Ross was "the largest and finest business ever done in the city up to this time in the way of selling goods running boats shipping & other incidents connected with it."

The drawing is on page 418 of a journal Martin wrote and illustrated in 1864 as he reflected on his life and activities up to that point. He wrote that the front of the building, which contained three stores, was built about 1832. He wrote, "During those days they were the largest stores in the city built of wood and were filled with dry goods groceries Rum hard ware fish salt &c."

He noted that in November 1865, the building was raised five or six feet above the grade of the new Strickland Block and a new front added.