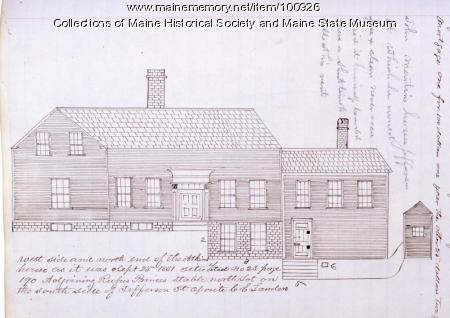 The Atkins house was on the south side of Jefferson Street in Bangor. John Martin (1823-1907) purchased the house sometime in the 1840s from merchant Rufus Prince, for whom Martin worked as an accountant.

Martin drew the illustration of the west side and north end of the house as it appeared on September 25, 1851.

The drawing appears on page 387 of Martin's journal, which he wrote and illustrated in 1864 to recount his life and activities for his children. The journal describes what Martin did to improve the property after someone built on the next lot, right against his house.

Martin noted in the journal that the house is at it appeared on September 25, 1851. He probably copied an earlier drawing into his 1864 journal.