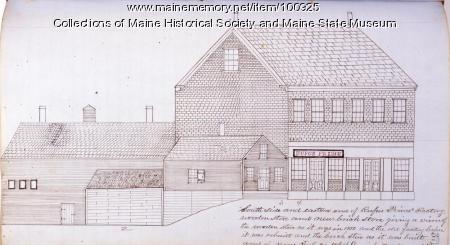 The plans for this store were drawn in about 1835, but Rufus Prince's financial problems in 1836 delayed construction of it for 17 years. Prince was a soap and tallow chandler in Bangor. The store also included dry goods.

When he was about 21, John Martin (1823-1904) began working for Prince as a bookkeeper and store tender. Martin, who began writing and illustrating a journal reflecting on his life and activities, drew this illustration of the south and eastern end Prince's brick store and factory.

The journal provides detailed descriptions of the buildings and business.