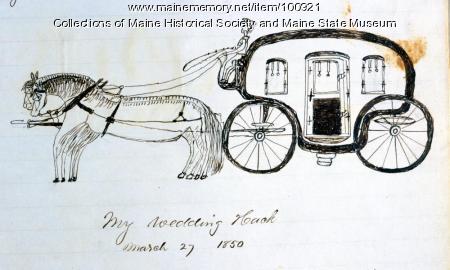 He wrote, "This hack cost a thousand dollars and was owned by Mess Shaw & Billings and was perfectly black of the nicest polish and silver mounted in every particular even the hook on the end of the pole and all the window trimmings the glass lamps on the side of the drivers seat were cut the windows were one pane of clear thick German glass and also the window to the door the straps were plated."

The horses were black geldings that cost $500. The inside of the hack, he wrote, was trimmed in German broadcloth.

He included the illustration on page 335 of a journal he began writing and illustrating in 1864, reflecting on details of his life and activities so his children would know what Bangor, business, homes, and various activities were like during their father's life.

The Martins had six children, only two of whom survived their parents.