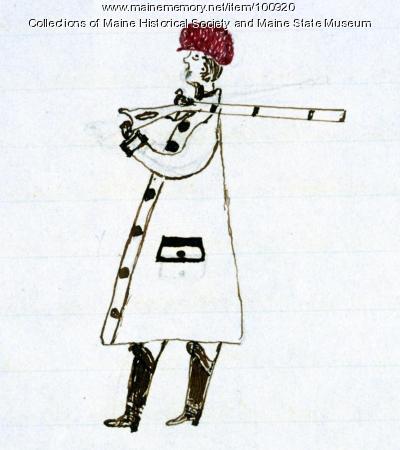 An illustration of Alonzo E. Raynes (1830-1918) pictures him as he is about to board the bark Suliote on January 24, 1849, sailing from Bangor to California and the Gold Rush.

Raynes' half-brother, John Martin, included the illustration on page 304 of a journal he wrote in 1864 reflecting on his life and activities in the Bangor area.

Martin wrote that Raynes wore a "red squirrel colored fur cap, Pilot cloth over coat, hunting boots, and rifle. The form of the cap is exact, the outlines of the coat and boots very near. his rifile was encased to the lock his valise I carried to the exchange for he took his Guitar which was a valuable article to him for many years as will be seen in my account."

Raynes lived in California for the rest of his life.