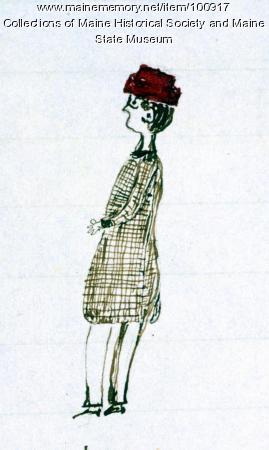 Alonzo E. Raynes (1830-1916) of Brewer, the son of Anna and Solomon Raynes, is shown wearing a red velvet cap and checked plaid cotton apron in this drawing by his half-brother John Martin.

Martin (1823-1904) drew the image from recollections of how Alonzo appeared when he began to work in the fields at Reed Hardings farm in Brewer.

Martin wrote, "This style of cap was in fashion when I was 4 years old they had no visor and were wadded with cotton batting and sometimes trimed with fur. From his infancy to this date he was always watching my labours when he began to want to be in the fields and with me where ever I went."

The image appears on page 283 of the journal Martin began in 1864, recalling his life and activities he observed or in which he was involved.

Raynes went to California in early 1850 during the Gold Rush fever. He lived in the Yreka, California, area the rest of his life.