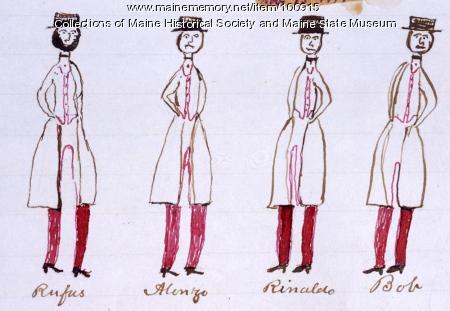 The members of the Bangor Quartette Club as they appeared at the old Town House in Hampden, are, from left, Rufus Wiggin, Alonzo Raynes, Rinaldo Wiggin, and Robert Cram.

John Martin (1823-1904), the half-brother of Alonzo Raynes, drew them in their buff vests and pants, black frock coats, and straw hats. Martin began writing about his own life and activities in 1864 and included two drawings of the members of this group. This drawing appears on page 277 of Martin's journal.

On January 31, 1850, Alonzo Wiggin and Robert Cram sailed from Bangor on the bark Suliote for the California gold fields. Rufus Wiggin sailed on February 13, 1850 on the schooner Eudorus for the same destination.