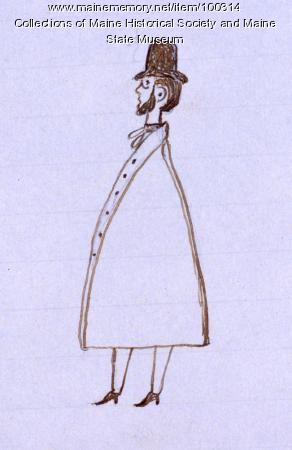 In a journal he wrote in 1864, John Martin (1823-1904) of Bangor reminisced about his life and experiences. To accompany his written descriptions, Martin illustrated portions of the text.

One of his interests was fashion. This illustration, from page 212 in the journal, shows Martin in a new outfit he bought in 1845-1846. He wrote of the Spanish cloak, "These cloaks were cut full circle and I bought a nice German blueblack broad cloth one of Davis & Gilligin in the circular block for 15$ which was as nice a one as I could see and it came to my boot tops perhaps below & as I was some deformed it was a very appropriate garment for me."

In the spring of 1846, he bought the stove pipe hat, which had just come into fashion. He called it a silk, round topped fur hat. He also described the rest of his outfit, including where he purchased the items.