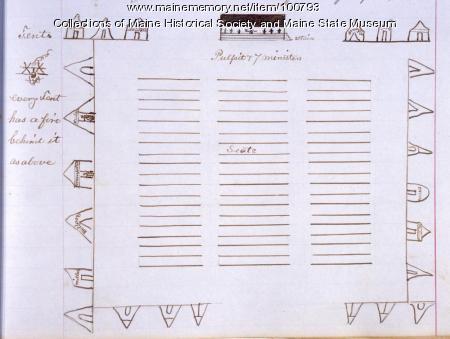 The Millerites, a religious group who believed that Jesus would reappear on earth between March 21, 1843 and March 21, 1844, held a camp meeting at Mill Creek in Orrington in 1844.

John Martin (1823-1904) learned about the meeting and went to the campground to observe. He drew the picture in 1864 and included it on page 199 of the Journal he wrote about his life and experiences. He returned to the site in 1864 before making his sketch.

He wrote that the pulpit was on the western slope of a hill and that there was space to seat "ten thousand" people. He later said there were "ten hundred" people singing hymns. In his journal, Martin describes the tents, lights, pulpit, and other activities in great detail.

He wrote, "This ever remembered occasion was about the last days of Miller doctrine in this part of the county."