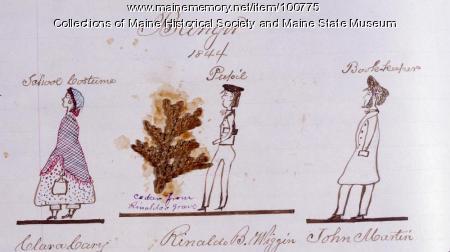 In the journal about his life that John Martin of Bangor began writing in 1864, he drew illustrations of himself, his friend Rinaldo B. Wiggin and his future wife, Clara Cary, as they were in 1844. The illustration is on page 186 of the journal.

Martin (1823-1904), an accountant who was interested also in architecture, gardening, fashion, dancing, and almost everything that happened around him, married Clara Cary (1836-1902) in 1850. They had six children, only two of whom survived their parents.

Beneath the illustration, that includes a piece of cedar from Wiggin's grave, Martin wrote: "Clara Cary was large around in proportion to her height but from this time untill she was 19 years old she grew slim and a little taller. her dress was a blue & red spotted Delane with a small plaided shawl blue white & Red a wide stripe of blue a narrow stripe of Red and the ground work white with a red fringe. This shawl for some three or four years was her constant companion."