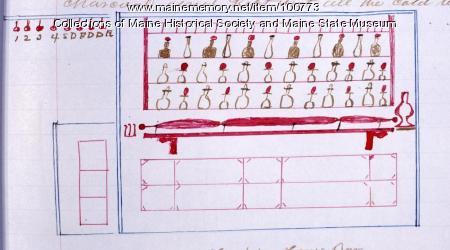 Martin was apprenticed to Dr. Increase S. Sanger to learn the apothecary business. Sanger bought the Hampden House and young Martin worked there until Sanger sold the business. It was at the Hampden House that Martin, who lived most of his adult life in Bangor, learned to dance, which became one of his passions.

The illustration is on page 105 of "John Martin's Journal," in which he described his life and his observations of the world around him. He wrote that he had not intended to illustrate the journal, but did so because it was important to representing the past.