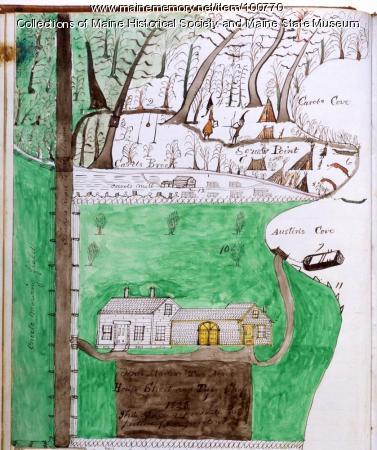 John Martin (1823-1904) of Bangor drew this illustration of his parents' home in Ellsworth as it probably looked in 1823. Martin's father, also named "John," was born in Cromwell, England, and came to Maine as a young man.

The younger John Martin visited Ellsworth as an adult, with his mother, and re-created the home that she lost after her husband died.

The illustration appears at the beginning of "John Martin's Journal," which he wrote beginning in 1864. He identified a number of details in the drawing, including Card's Cove, Cards Brook, Squaw Point, Cards Mill, Austin's Cove, the Union River, and his father's tailor shop.