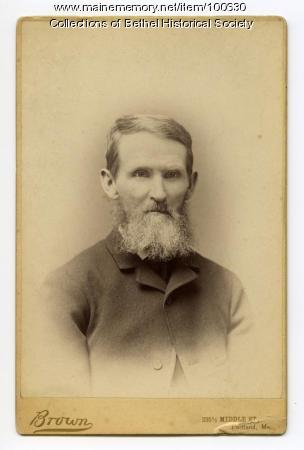 At the outbreak of the Civil War, Clark S. Edwards (1824-1903) became a military recruiter and was selected as captain of the first company organized in Oxford County. This company became Company I of the 5th Maine Regiment, and Edwards later commanded the Regiment and participated in a number of leading engagements of the Army of the Potomac including Gettysburg.

For conspicuous bravery, Edwards was later promoted to the rank of Brigadier General by brevet in 1865.

After the war, Edwards worked in the farming and logging industries. He ran for Governor of Maine on the Democratic ticket in 1886, but was defeated by the Republican candidate. In 1890, he was appointed by the Governor to be Maine Commissioner for the Columbian Exposition in Chicago.

Edwards died in 1903, and his funeral was attended by Gen. Joshua Chamberlain. He is buried in Bethel’s Woodland Cemetery, where his sons purchased a lot in his memory for the use of Civil War soldiers who could not afford a burial.