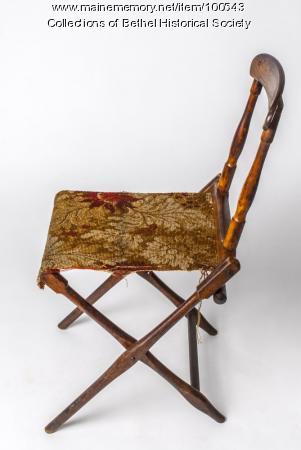 General Cuvier Grover’s camp chair was manufactured in 1861 and used by Grover throughout the Civil War.

When the Civil War broke out, Grover, from Bethel, was Captain of the Tenth Infantry at Fort Union, New Mexico. Reporting for duty in Washington, D.C., he was promoted to Brigadier General of volunteers. In that capacity, he served with the Army of the Potomac, fighting in the battles of Second Bull Run, Yorktown, Williamsburg, Fair Oaks, Savage Station, Glendale, Malvern Hill, Bristoe Station, Winchester, Fishers Hill, and Cedar Creek (where he was wounded), as well as the Shenandoah Valley Campaign for which he received a brevet to Colonel in the Regular Army for gallantry in these actions.

Grover was promoted to Brevet Major General of Volunteers in 1864.