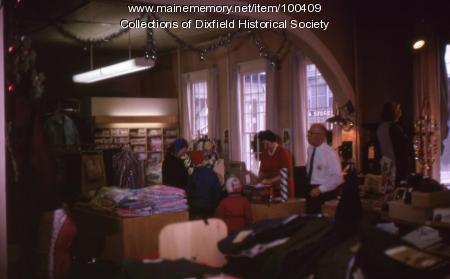 Howard's Drygoods Store was in business from the 1930s thru the 1960s, operating out of the Harlow Block on Main Street in Dixfield.

This rare interior view shows owner Raymond Howard (1907-1993), and employee Ruth Ann Holman waiting on customers during Christmastime. Howard's supplied all manner of clothing, footwear, cloth, sewing notions and general household supplies. The store was a staple for the citizens of Dixfield and surrounding communities, especially during the post World War II era.

Elbridge Harlow built the Harlow Block in 1878, which housed many businesses on the corner of Weld and Main Streets over the years. Howard's Store was originally the Harlow's Men's Store. Following Raymond Howard's retirement in 1971, it became Dunton's Store. The Hotel Stanley, the Rumford Bank and Trust Co., and telephone and law offices were also located here at various times.

The Harlow Block was razed in 1979 to make way for a new Maine National Bank that in 1999 became Bangor Savings Bank.