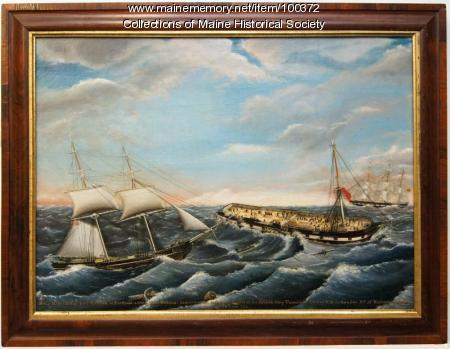 The 200-ton brig Harriet left Bordeaux, France in November, 1851 loaded with brandy, French silks, and china. The ship was sailing for New York when it came upon the sinking British vessel, Unicorn, off the Grand Banks of Newfoundland. The Unicorn's cargo of railroad iron shifted during a violent storm, causing the vessel to list.

Built in Yarmouth in 1848, the Harriet was as a small vessel, unsuitable for accommodating the 325 passengers and crew of the Unicorn. Despite the complications, 35-year old Captain Levi Marston of North Yarmouth worked with his crew during the dangerous storm, rescuing everyone, including 52 infants. The ship Daniel Webster came to the scene late in the day, taking 178 passengers aboard.

The Unicorn was bound for St. John, New Brunswick, but since the Harriet and the Daniel Webster were shipping vessels on contract, Unicorn passengers were obligated to travel to New York and to England, respectively. Both ships ran precariously short on food and water rations due to the influx of people on board. Levi Marston received a medal from Queen Victoria for his bravery and humanity during the rescue.

Joseph B. Smith was a rescued passenger who made pencil sketches of the shipwreck, which he later memorialized in this 1851 oil painting.