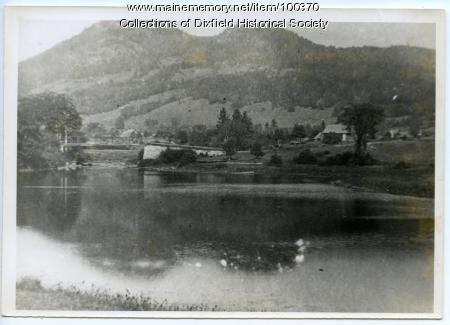 The settlement known as Holmantown split into the towns of Dixfield (incorpotated 1803), and Mexico, Maine (incorporated 1818). The Webb River serves as the boundary, with Dixfield to the east and Mexico to the west.

Bridging Webb River became vital for both towns. Spanning the Webb River is the Thaddeus White Bridge--known locally as the Thad White Bridge--with Dixfield's iconic Sugarloaf Mountain in the background. The buildings nearest the bridge are the Dixfield Lumber Company, also called the Towle-Fairbanks Mill.

The Thad White Bridge is located at the end of Coburn Avenue in Dixfield. It originally connected the "backkingdom" area of Mexico and a white house built by Henry White (1792-1836) in the early 1800s. The name of the bridge changed through the years from the Thomas Jefferson White (1808-1895) Bridge, and later, to the Thad White Bridge, for Henry's son and grandson.

Thaddeus White was a stage driver. In 1846 his route included two trips a week from Dixfield to Hallowell and Augusta, and back. The stage wagons carried items such as farm goods, shingles, and potash and returned with molasses, window glass and other items that could not be home-grown.

Maintenance and repair of the bridge is a joint effort between both towns. The bridge was rebuilt after the Flood of 1936 wiped it out. By 2000, the bridge was deteriorating and safety concerns prompted the need for a new structure. On November 22, 2008, the new Thad White Bridge was dedicated by both Dixfield and Mexico citizens who continue to be good neighbors.