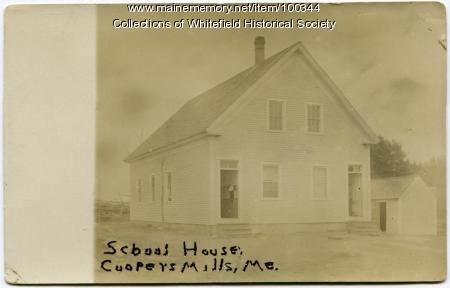 Built in 1895 to replace the "wreck of a school house" called Dow's School, the Coopers Mills School accommodated eight grades on the first floor and, for several years, high school sessions on the second floor.

Originally one large room for the lower grades, by the mid 1940s there were two rooms, the right door for grades 1 - 4, and the left for grades 5 - 8. Note the entry room at each door with wainscoting and rail above with coat hooks. The outhouse was attached to the back of the building on the left, allowing all grades access from inside the school. Until the late 1940s, instructors taught students the Palmer writing method at this school.

The Lion's Club purchased the building after the school closed in 1959, when a consolidated school was built in Whitefield. As of 2014, the Lion's Club continues to use the old school house for its functions at 41 Main Street.