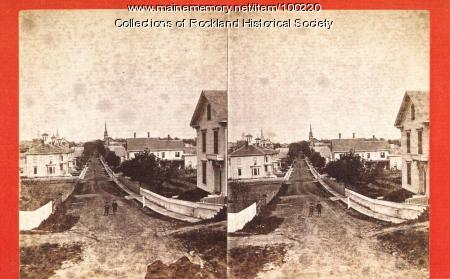 This is a view looking east down Masonic Street from Broadway in Rockland. The house on the right belongs to Caleb G. Moffitt, the mayor of Rockland in 1876 and 1877.

The three new houses on the left, just east of Broad Street, each with a cupola and a small front porch, were all built by W. H. Glover around 1875. The nearest one belonged to Edward K. Glover, the next one belonged to George F. Kaler, and the third one belonged to Charles F. Wood.