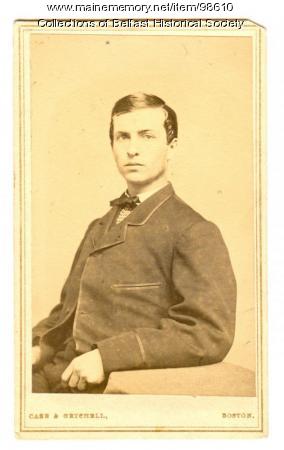 Albert C. Burgess, pictured here, received a letter from his brother William, dated July 15, 1864. William Burgess was serving with the 59th Massachusetts Infantry at Petersburg and had just been shot by a Rebel sharpshooter. He considered the wound to be quite serious and wished to tell his family that he probably would not survive. Albert was to convey both the news and William's goodbyes to the rest of the Burgess family.

Albert Burgess served as a Second Lieutenant with Company B, one of the five Divisions organized in Belfast to enroll men into the un-uniformed State Militia in 1862. Following the war, he worked in the hardware business and had a store on Main Street for many years.