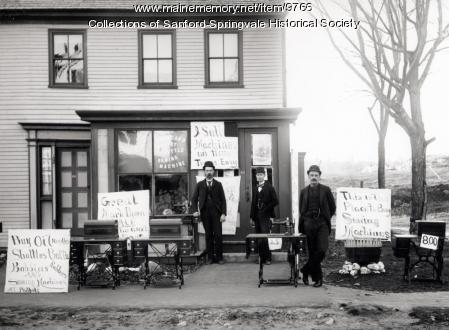 Photographer Fred Philpot, the man standing at left, was an enterprising business man. Sewing machines were one of his many sidelines.

He also sold bicycles, pianos and organs and was York County's largest producer of postcards.

The store in this photograph was part of the Old Tavern, one of George Nason's many properties. It was located on what became the Nasson College lawn next to the bank on Springvale Square.

The building burned along with most of Springvale in the great fire of April 14, 1905. Philpot lost his store and its contents but continued to sell sewing machines at his studio on Kimball Street in Sanford.