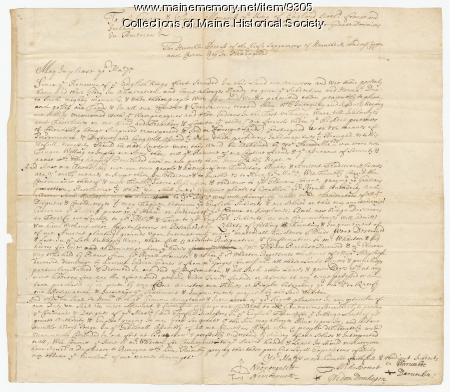 Conflicts between Wabanakis and settler colonialists during King Philip's War rendered the District of Maine unsafe. In the course of five weeks in 1675, 60 miles of coast east of Casco Bay had been wiped clean of English settlements. The settlers abandoned their homes, becoming refugees in Massachusetts.

Hardships were equally severe for the Wabanaki. Families fled their villages, leaving cornfields unharvested. Denied access to their guns, ammunition, and fishing grounds, many starved.

When settler colonialists began returning to Maine, they demanded oaths of loyalty from the Wabanaki. Sagamores of the Kennebec, Androscoggin and Casco Bay regions agreed to cede some land use to Richard Wharton—a Boston merchant, land proprietor, attorney, and slave trader—and pledge their loyalty to the English crown in this document. The oath traces the diplomatic agreements Native people made by the "ancient Indian Grants" from Ferdinando Gorges through Thomas Purchase. The area was later resettled by Pejepscot Proprietors in 1713 and further populated by the Ulster Scots.