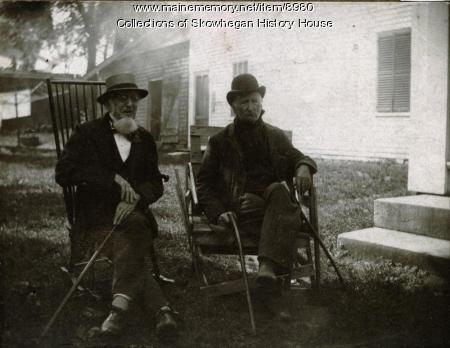 "We have here Samuel D. Arnold (at right) and Oliver Walker. The picture may have been taken about 1880. These two venerable citizens are seated in a dooryard on Pleasant Street, probably a part of the premises occupied by Mr. Arnold's daughter and her husband, Mr. and Mrs. Nathaniel Owen.

Mr. Walker lived on Court Street, at the corner of Cross Street, this location being now occupied by the Dr. Stinchfield place. Mr. Walker was instrumental in causing the town to purchase the cemetery lot on Parkman Hill, about 1867.

Samuel D. Arnold was a dry goods merchant in Skowhegan for many years. His son, George D., was also a merchant, but kept groceries instead of fabrics.