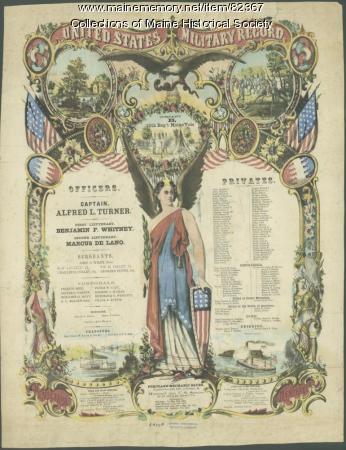 This memorial lists the soldiers of Co. B of the 10th Maine Infantry Regiment and provides details of their service during the Civil War, as well as general information about the regiment.

The company, known as the Portland Mechanic Blues, was first organized in 1807. It was mustered into service for the Civil War on October 4, 1861. The officers of Co. B were Capt. Alfred L. Turner, 1st Lt. Benjamin F. Whitney, and 2nd Lt. Marcus De Lano.

Such memorials were common after the war. Some are for entire companies, and others are for particular soldiers.