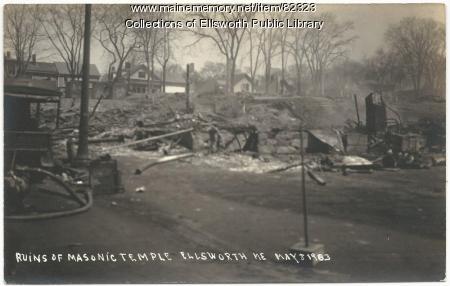 A postcard depicts the remains of the Masonic Lodge in Ellsworth following the Great Ellsworth Fire of 1933. The fire began on Sunday, May 7, 1933. It was set by Norman Moore in the Bijou Theater.

The fire destroyed 130 buildings, most of Ellsworth's downtown.

The Masonic Lodge was part of what was called the Manning block on the corner of Main and Franklin streets. It included a number of stores and offices, along with apartments and the Masonic Lodge. The lodge was on the third, being the top, floor of this structure.

After the fire, the Masons purchased for $2,500 the lot on Main Street that had previously held Hancock Hall, and constructed a new brick lodge that measured 50 by 90 feet.