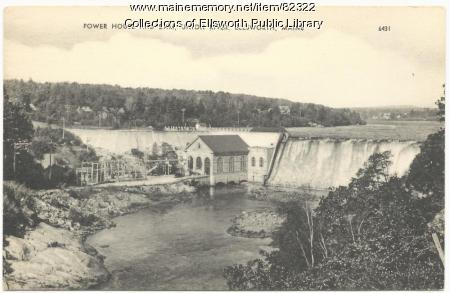 The dam's construction was contracted for on February 10, 1907 and was completed by the Ambursen Hydraulic Construction Co. of Boston, Massachusetts.

Before any concrete could be poured, almost 3,000 yards of solid rock had to be removed. The dam is constructed of steel-reinforced concrete while the power house is composed of concrete blocks, the roof waterproofed with asphalt and shingled with red Italian tiling.

The power house depicted here took extensive damage and was washed away in the flood of April 29 1923. However, repairs were made and the Union River Dam is still in service (2013), owned by the Bangor Hydroelectric Company.