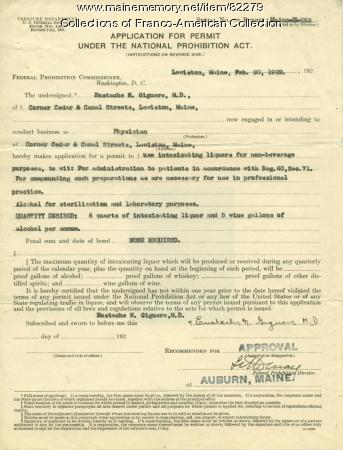 This permit is an approved request for the use and distribution of alcohol for medical purposes. It was awarded to Dr. Eustache Napoléon Giguère of Lewiston from the federal government for sterilizing his medical instruments and treating patients.

The production and sale of alcohol was prohibited in the United States between 1920 and 1933. However, during the Prohibition era, certain exceptions were granted to the complete ban on the consumption of alcohol.

Catholic priests and Jewish Rabbis, for example, were allowed to administer wine as part of their religious rites. In addition, doctors, like Giguère, could obtain sterilizing alcohol, and prescribe liquor for medicinal purposes, if they obtained permits such as this one.

There is no evidence that Dr. Giguère's permit was used for anything other than legal purposes, but in many instances nationwide, doctors were extremely liberal with their prescriptions for whiskey, brandy and other hard alcohols.

Prohibition was very unpopular with Catholic populations across the United States, and in fact much of the impetus for the movement had come from the anti-Catholic, anti-immigrant sentiment of the day. Maine's Franco-American population was also well-placed to circumvent the law, since Canada was a popular destination for smugglers.

Eustache Giguère (1893-1975) was a physician who practiced in Lewiston at St. Mary's Hospital (now St. Mary's Regional Medical Center). His daughter, Madeleine helped to establish the Franco-American Collection at the University of Southern Maine.