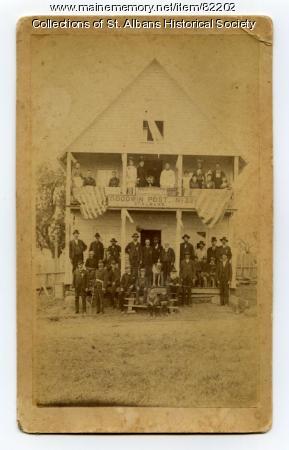 After the Civil War veterans organizations, such as the Grand Army of the Republic were formed. These organizations enabled veterans to share stories of the war and maintain connections with each other. At the community level these organizations were called "Posts." This photograph likely shows the Goodwin Post #32 of St. Albans at the annual GAR encampment at Camp Benson in Newport.

Stamped on the back of the postcard is "W. H. Howe, Photographer, Pittsfield, Maine."