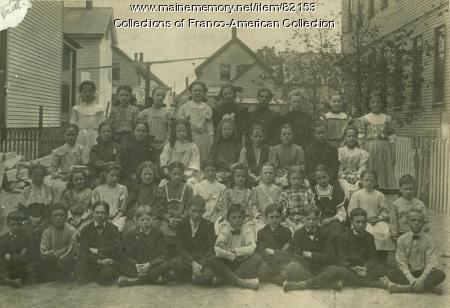 This class pictured of from the Little Canada School which taught the children of Lewiston's large population of French-Canadian immigrants, who came to the city to work in its booming textile industry.

Since these children often spoke little or no English, they struggled in the city's public schools. Moreover, parents were keen that their children maintain their linguistic and cultural identity. So this school, known simply as the "Ecole du Petit Canada" or "Little Canada School", provided lessons in French to the Franco-American children.

Eventually, the Dominican Order would send representatives from Canada to Lewiston to provide church services and education to the Franco-American population. The Ecole du Petit Canada would be subsumed into St Mary's Parish School.