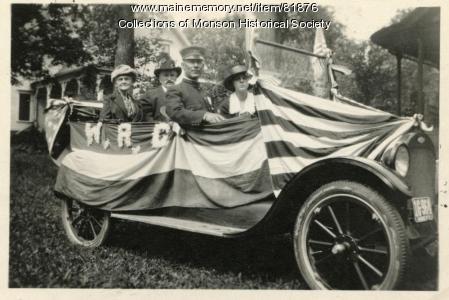 Seated in the back seat of this decorated vehicle in the Monson Centennial parade, held on August 24, 1922, are Mr. and Mrs. Ira Wing representing the Monson Gerry Post #5 of the Grand Army of the Republic (GAR) and the Women's Relief Corps (WRC), respectively.

The Grand Army of the Republic was a fraternal organization of veterans of the Union Army who served during the American Civil War. Ira Wing enlisted June of 1861 and served for three years achieving the rank of 1st Lieutenant. He fought in many battles, including Gettysburg, and proudly attended the encampment of the GAR to commemorate the 50th Anniversary of the battle.

Wing was commander of the Monson GAR Post for several years. His wife, Augusta Wing, was a founding member of the Women's Relief Corps (WRC). in Monson and served as the State of Maine President of the WRC in 1894-95.

The Relief Corps was founded on a National level in 1869 by ladies whose husbands belonged to the Bosworth Post of the GAR in Portland, Maine. The mission of the Women's Relief Corps was to assist Civil War veterans and their families who were in need. By 1910 there were 160,000 members throughout the United States. The Monson Historical Society Museum has a set of the ribbons worn by the ladies at various officer positions as well as letters from the State of Maine WRC.