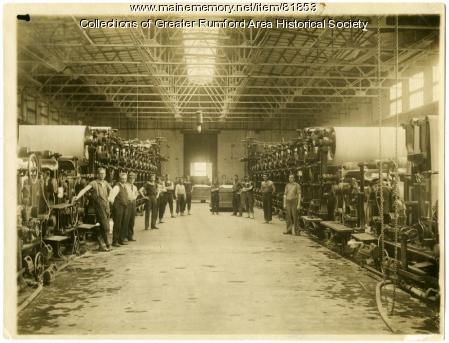 During the 1890s, Hugh J. Chisholm could see that the growth of the country required many more tons of fine quality paper. Thus was born his great Oxford Paper Company on December 7, 1899, and ratified by the State Attorney General the next day.

A Board of Directors met a week later with Waldo Pettengill elected as president. Hugh Chisholm could not hold this office as he was then President of International Paper. However, Mr. Chisholm was so organized that all the plans were in place such that before the end of December all of the major contracts were proposed and considered for all phases of the construction.

In 1900 contracts were awarded for the actual construction. As construction started, Mr. Chisholm was making a detailed survey of the markets for quality papers and it became apparent that two additional paper machines would be needed to meet the demand. On Sept. 6, it was decided to double the design capacity of the new Rumford Mill.

Production at the new mill began on November 9, 1901, with the first batch of soda pulp, and on November 17 of sulphite pulp. The first paper machine went into production on December 21. By February, 1902, all four paper machines were in operation and producing about 44 tons of paper a day.

Shortly after the start-up of these four paper machines, the Oxford Paper Company secured what was then considered one of the most valuable contracts in the paper industry. The contract was to manufacture all the postal cards used by the United States Post Office. The Oxford Paper Company was producing these cards at a rate of 3 million per day. This contract was extended and enlarged for an additional four years on Dec 13, 1905.