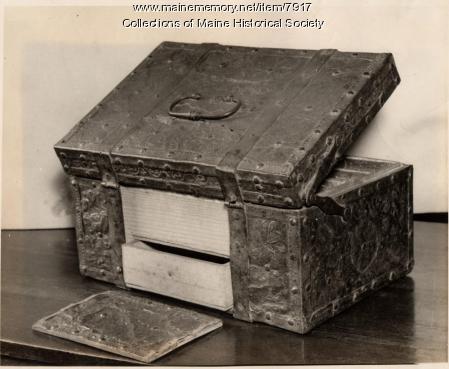 Father Sebastien Rasles (1657-1724) was a French Jesuit missionary who moved to Canada in 1689. He learned many of the customs and languages of the Wabanaki Indians of the Northeast, and became a trusted advisor to them.

In 1721 English settlers from Massachusetts raided Norridgewock (present-day Skowhegan) where Father Rasles was living. He escaped capture, but his strongbox, containing letters and documents, was confiscated. The box has a secret compartment.

In August 1724, a combined force of English militia and Massachusetts and Mohawk Indians destroyed the village at Norridgewock, killing as many as 100 Indians and Father Rasles.