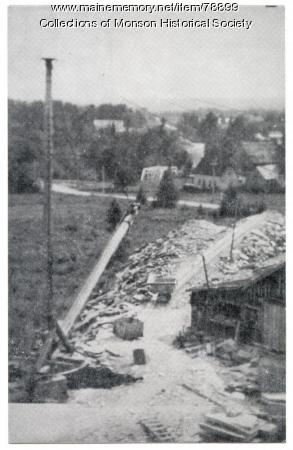 Written on the back of this photograph postcard is "Leighton's Quarry at Nortons Corner in Willimantic, Maine."

The village of Willimantic can be seen in the background of this photograph, behind the bridge crossing Wilson Stream. Leighton Quarry, in the foregound, was a small quarry with a mill, seen here on the right.

The dump box, in the center of the photograph, would take the waste slate on the tracks shown and dump it into great mounds next to the quarry itself.

On the left is the traditional pit boom used by the hoister operator to move the men and slate in and out of the quarry. Monson-Maine Slate Company operated the Leighton Quarry until the 1940s.