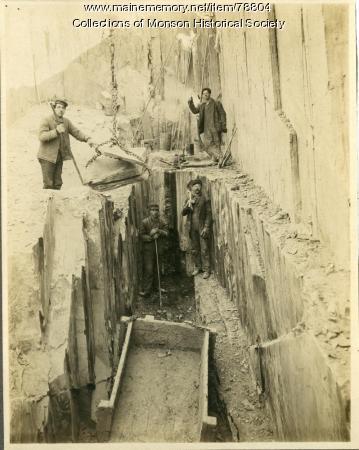 In this image, quarry workers are depicted carrying out several tasks required to extract slate from the earth for processing in the mills.

Workers would use shovels and metal picks to clear the larger pieces of slate from the quarry and then load it into the "box", located in the lower center of the photo, which was used to hoist the men and smaller pieces of slate in and out of the quarry.

Phillip Knight, former slate employee, has written on the back of this photograph "Notice that the cable clamps are every which way. What time I spent around the quarry, there was always an argument about which way they should be, apparently that was true back in the 1890's. We have since found the yoke part, to be on the loose end of the cable, if anything gets cut it is not the main cable. Peter Nelson on the lower ledge with shovel over his shoulder, is the father of August and Hollis Nelson."