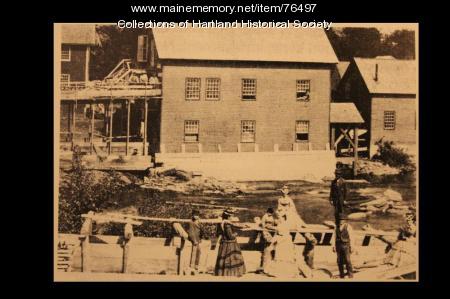 Citizens of Hartland waiting for the train boat to Pittsfield. Before a train line was built to Hartland, citizens used the train boat, via the east branch of the Sebasticook River, to get from Hartland to Pittsfield which was the nearest point of access to rail travel.

During the latter part of the 19th century, citizens of Hartland felt a collective sense of isolation because travel to other parts of Maine was challenging. There was considerable interest in having a rail line come to or through town. In 1866, citizens voted 92-3 to support an effort to convince the Belfast and Moosehead Railroad to build a line to Hartland. Several similar votes were taken in the next two decades with the continuing support culminating in the start of construction on the Sebasticook and Moosehead Lake Railroad in 1887.