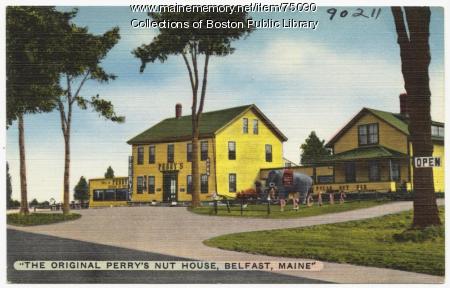 Perry's Nut House has been in business since 1927. With the menagerie of exotic stuffed animals, museum pieces and curios Perry Nut House was more than just a place to buy nuts. Located on the coastal road to Bar Harbor, Perry's features giant painted animal sculptures outside and, until 1997, a display of exotic nut and seeds from around the world in addition to the stuffed animals inside.

In 1997, the third owners sold most of the original taxidermy animals and other eclectic display items in an auction that was held in the store. As of 2009, however, the current owners of Perry's Nut House are working to restore Perry's to its former decor.

The Tichnor Brothers printing company published this type of postcard circa 1938 as part of their Maine series. These, and other postcards, by the Tichnor Brothers Company are officially known as the Tichnor Gloss Series because the photographs were notoriously retouched on such a level that does not allow the postcards to be classified as photographs or paintings. The caption reads, "The Original Perry's Nut House, Belfast, Maine."