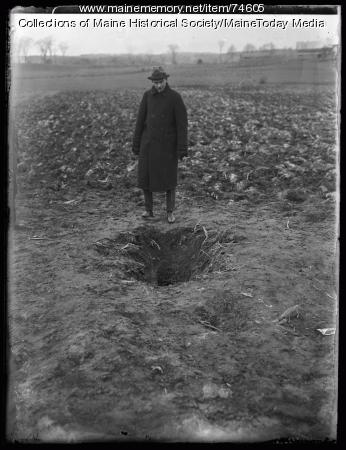 In November of 1924 police investigators searched the Cote property in North Gorham for the bodies of William Sandborn and Alphonso Cote.

Sandborn, the first husband of Lottie Cote, went missing June 20, 1910. The search for Sandborn stopped when Lottie explained he ran away because he had forged her signature on notes that were due.

On August 7, 1924 Lottie's second husband Alphonso Cote was murdered by Charles H. Fielding. Fielding was staying on the Cote property with his wife who was Lottie's half sister. Fielding conspired with Lottie the night before the murder. He was reportedly in love with Lottie and wanted to protect her from "bad tempered" Alphonso.

In light of the recent murder of Alphonso, investigators decided to continue the search for Sandborn. After searching the Cote property, no body was found.

Ralph Sandborn (Lottie's son from her first marriage) buried his stepfather, Alphonso, in a plot he knew was scheduled to be plowed the next day. His brother, Roland Sandborn, unknowingly plowed over the body of Alphonso, removing all trace of ground disturbance.

Eventually Ralph Sandborn confessed to police the whole story, and he showed investigators where the body was buried. Ralph's accessory charges were dropped because police thought he "acted under his mother's evil influence."

Charles H. Fielding confessed to murder and was sentenced to life at Thomaston State Prison. Lottie was acquitted as an accessory beforehand, but was tried again as an accessory afterwords. She died of pneumonia before a verdict was reached.