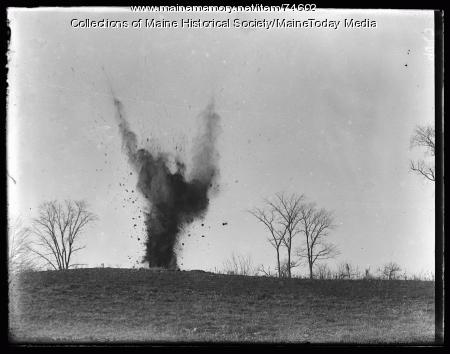 In November 1924 investigators used explosives to loosen the ground so they could dig on the Cote property in North Gorham as they searched for the body of William Sandborn, who went missing in 1910.

Sandborn was married to Lottie Cote and she had explained that he ran away after forging her signature. Investigators became suspicious, however, after the murder of Lottie Cote's second husband Alphonso. Investigators never found Sandborn's body.

Charles H. Fielding, who was staying at the Cote house with Lottie Cote's half-sister, reportedly was in love with Lottie. Fielding and Lottie's son Ralph Sandborn lured Alphonso Cote into the woods where Fielding and Sandborn claimed they had seen a deer.

There, Fielding shot Cote from behind. Lottie had conspired with Fielding the night before the murder and was charged as an accessory before the crime. Ralph Sandborn was charged as an accessory after the crime as he buried his stepfather's body in a plot he knew was to be plowed. His brother, Roland Sandborn, plowed over it the next day, removing all traces of the burial.

Lottie, Ralph and Fielding were all questioned by police, but it was Ralph who gave up the information first. Ralph's charges were dropped because police believed he "acted under his mother's evil influence."