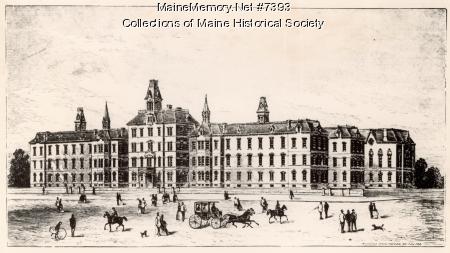 This drawing shows the original proposal for the Maine General Hospital by architect Francis Fassett. There were to be four wings or pavilions leading out from a central building. The siting would permit grand views of the White Mountains and the ocean from atop Bramhall's Hill. From a more practical standpoint, the design would allow for the free circulation of fresh air, minimizing any spread of disease.

The final construction, still visible today, resulted in the central building but only two of the pavilions. From financial necessity, the entire structure was built in phases, ending in 1892 with completion of the west wing and superintendent's house. The hospital began accepting patients in 1874 with only the east pavilion standing.