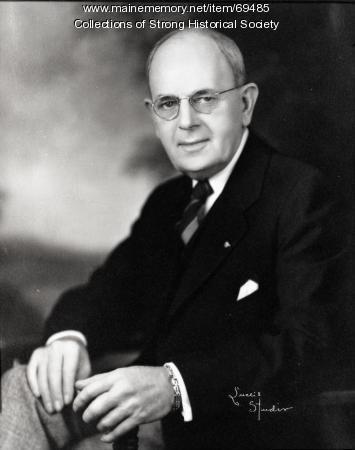 Charles William Bell (1873-1944) was born and raised in Strong, the son of James H. and Sarah Allen Bell. After receiving his medical training at Maine Medical School at Bowdoin in 1897, he returned to Strong, opening his small practice in his father's home.

He married Annie Stubbs, November 7, 1900, and a year later they purchased Dr. George Z. Higgins home and moved his practice into it in 1902. His practice grew and within a short time was handling emergency surgery cases in his home, assisted by Mrs. Bell. At that time the closest hospital was in Lewiston. Later the necessity for more rooms became so urgent that the Estate of Charles Forster established a complete and modern hospital of 16 beds for Dr. Bell to run, in the building they had operated as Hotel Strong.

Dr. Bell operated the hospital until 1937, sometime after Franklin County Hospital was created in Farmington. He moved his practice to Farmington after 40 years of service in Strong. As a physician and surgeon, he was loved and respected by all.