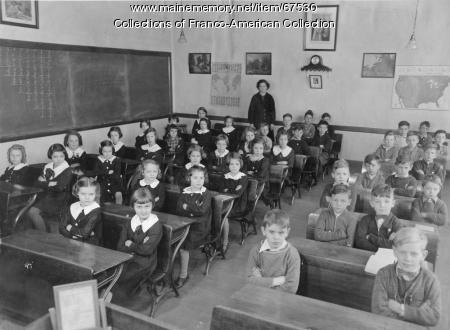 Boys and girls in this classroom of fourth graders at St. Peter's School in Lewiston in 1937 are seated separately. By fifth grade, boys and girls attended single-sex schools.

St. Peter's was one of a number of parochial, or parish-run, schools in Lewiston and Auburn. Until the middle of the 20th century, the majority of classes in the Lewiston parish schools were held in French.

Since the State of Maine had outlawed the speaking of French in public schools, the Catholic schools were for some time a haven for French-speaking communities.

However, two major factors led the teachers to introduce a progressively anglophone curriculum: parents encouraged their students to learn English as a means of integrating with wider society and students themselves were exposed to more English through the popularity of television.