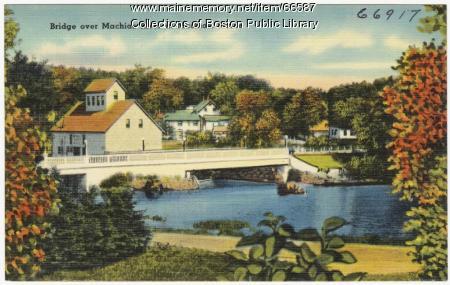 Passamaquoddy and other Indian people lived in the Machias area for centuries before settlers first began going to there in 1633. The town was later settled in 1763. The name Machias comes from the Passamaquoddy meaning bad little falls, which refers to the Machias River.

Machais is perhaps best known as the location of the first naval battle of the American Revolutionary War. But, by the 19th century Machias had built up a booming mill industryin mostly wood, but there was also several ship yards, an iron foundry and machine shop, two grain mills, a carding mill, canned-food factories, carriage factories, sail loft, two printing establishments, a tow boat company, and a silver mining company.

The Tichnor Brothers printing company published this type of postcard circa 1938 as part of their Maine series. These, and other postcards, by the Tichnor Brothers Company are officially known as the Tichnor Gloss Series because the photographs were notoriously retouched on such a level that does not allow the postcards to be classified as photographs or paintings. The caption reads, "Bridge over Machias River at Machias, Maine."