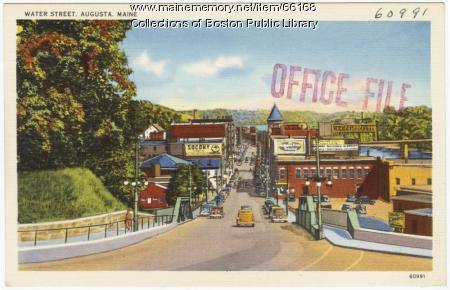 Many fires damaged this concentrated area, including one significant fire in 1865 that destroyed nearly 100 buildings. In 1890, the first trolley line began operation down Water Street, connecting Augusta with Gardiner and Hallowell to the south. In 1932, the motor buses replaced the trolley line.

With the completion of the Maine Turnpike and Interstate 95 in 1955, local commercial developments began to move away from Water Street and closer to the Interstate. Though since the 1980s there has been a continued effort to revitalize the downtown area.

The Tichnor Brothers printing company published this type of postcard circa 1938 as part of their Maine series. These, and other postcards, by the Tichnor Brothers Company are officially known as the Tichnor Gloss Series because the photographs were notoriously retouched on such a level that does not allow the postcards to be classified as photographs or paintings. The caption reads, "Water Street, Augusta, Maine."