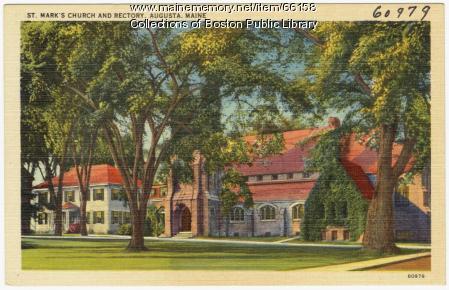 St; Mark's parish in Augusta dates from 1840. as of 2012 the parish is still active in the community and its current building was built in 1886 and added to the National Register of Historic Places in 1984. This structure replaced an older, smaller wood structure built in 1841, which was located just north of the current site of Lithgow Library.

Saint Mark's is one of two Episcopal congregations in Augusta. The other is Saint Barnabas Episcopal Church on the city's east side

The Tichnor Brothers printing company published this type of postcard circa 1938 as part of their Maine series. These, and other postcards, by the Tichnor Brothers Company are officially known as the Tichnor Gloss Series because the photographs were notoriously retouched on such a level that does not allow the postcards to be classified as photographs or paintings. The caption reads, "St. Mark's Church and rectory, Augusta, Maine."