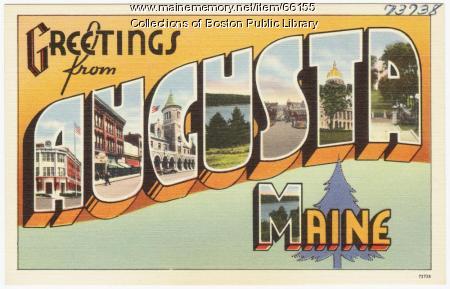 A Tichnor Brothers postcard that promotes tourism to Augusta Maine by depicting the Capitol building, the post office, a section of historic downtown Augusta, the Kennebec River and Augusta State Park, also known as Capital park.
The Tichnor Brothers printing company published this type of linen postcard, known as the Tichnor Gloss series, around 1938 as part of their Maine series of tourist postcards. The caption reads, "Greetings from Augusta, Maine."