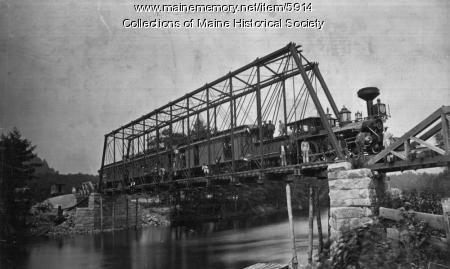 The locomotive the "Ossipee" #4 is pulling cars across the railroad bridge in Hiram, crossing the Saco River. The Saco River bridge of the Portland & Ogdansberg Railroad (later Maine Central Railroad running from Portland to St. Johnsbury, Vermont) is in Hiram at the foot of Mt. Cutler.

This photo shows an earlier bridge, later replaced by the steel truss bridge, built on the same abutments, currently at the site. This was also the junction with the Bridgton and Saco River Railroad, a narrow-gauge railroad running from Harrison to this junction in Hiram.

The Bridgton and Saco River line was dismantled to become, for a time, the Edaville Railroad on Cape Cod. Recently, the line was transported back to Maine and has been resurrected as a tourist attraction near the Old Port district of Portland as the Maine Narrow Gauge Railroad Co.