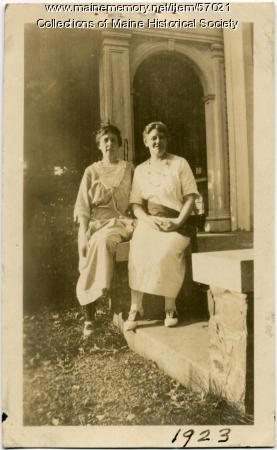 Elise Fellows White, a musician, and Zaidee Morrison, an artist, pose at the Edna Bunker house in Skowhegan in 1923.

Morrison (1872-1953) was a painter and illustrator. She studied in New York at Cooper Union Art School and the Art Students League, among other venues.

White (1873-1953) studied violin in Boston and Europe before marrying Bruce White, a mine owner in British Columbia. The couple separated and White and her two young sons returned to Skowhegan. She pursued her musical career, and wrote poetry and newspaper and magazine articles.