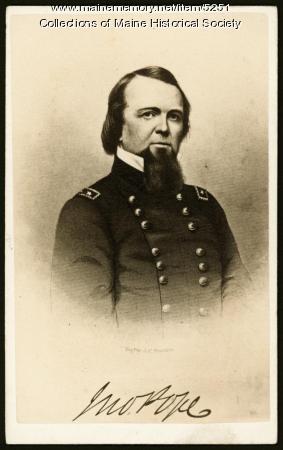 John Pope (1822-1892), a native of Kentucky, was a career army officer who reached the rank of Major General in the U.S. Army during the American Civil War. At the time of the photo he appears to be wearing the insignia of a Brigadier General, which was his rank during the Civil War.

He was originally from Kentucky, graduated from the U.S. Military Academy in 1842, served in the army for about 48 years, including West Point, and retired on his 64th birthday in 1886. He was one of the officers selected to escort Abraham Lincoln from Illinois to Washington following his election to the presidency.

This is from a collection of card photographs belonging to Abner R. Small, a soldier in the 16th Maine volunteer infantry. Written on this card is, "Pope."